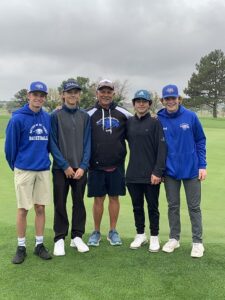 After a mind-blowing season, full of perpetual wins, and a League Championship under their belt, fans would never guess that the SkyView Academy Boys Golf season started off on a more apprehensive note.

The boys began the season uneasy, not knowing who their coach would be, or what to expect. Coach Mike Morang, new to SkyView Academy, also felt a little trepidation about taking on 11 players to coach as just one person. "I was very fortunate to have the help from three assistants or this year would certainly not have turned out the way that it did," says Morang. "From day one, all the players accepted the change in coaching and came to each and every practice ready to learn and go to work."

Considering all of the new changes the team was still on par and ready for their first tournament on August 11th at Flatirons Golf Course in Boulder despite barely having had a full week of practice. The team had an outstanding finish of 3rd overall within the league; a promising start to the year.

The Hawks turned up the heat as they headed to Applewood on August 18th and the season really began to take shape. The boys took a solid first-place finish and a first-ever league win by 7-strokes.

There was no backing down now. The following week they attended a non-league invitational at Homestead where they won again. The floodgates had been opened for this team. The next four tournaments went as follows:

The Hawks won the 2022 Championship by only 3 strokes over Dawson; a great team with terrific players.

One of the great accomplishments of the team this year is that when one of the top players on the team faltered, the others stepped up and kept battling. Yesterday, our number 5 ranked, and our number 4 ranked, stepped up to help our number 1 & 2 players solidify the League Championship. All of our players, from 6th - 11th, deserve as much credit as they have all become integral players and teammates who have helped each other and the team every step of the way.

The Hawks really built their camaraderie and came together during team practices throughout the season. It wasn't unusual to see some of the top players on the team working with their teammates on their swings and lending positive support throughout the ranks. Coach Morang said of his team, "It was a very gratifying thing to see them all pitch in and help each other improve. This team has a solid core group of players as well as up-and-coming players that make the upcoming seasons that much more exciting."